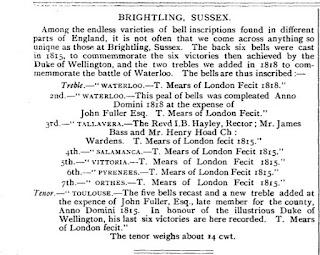 Fuller wished to celebrate the victories of the Duke of Wellington by gifting this peal of bells to home Brightling church. They are still rung regularly by the dedicated bellringers of the village.

The Battle of Salamanca was fought on 22 July 1812 in Spain; The Battle of the Pyrenees lasted from 25 July to 2 August 1813 on the Spain/France border, and Wellington's decisive victory over Napoleon took place at Waterloo in Belgium on the 18th of June 1815.

Some of the spellings given here vary from those of the places where Wellington's battles occurred. Tallavera = Battle of Talavera, Spain (27-28 July 1809); Vittoria = Battle of Vitoria, Spain (21 June 1813);  and Orthes = Battle of Orthez, France (27 Feb 1814). I have not seen the actual inscriptions on the bells so I cannot confirm which spellings were used there.

The 1979 Brightling Church Guide, written by Diana Boyd, mistakenly gives the name "Trattoria" instead of  "Tallavera".