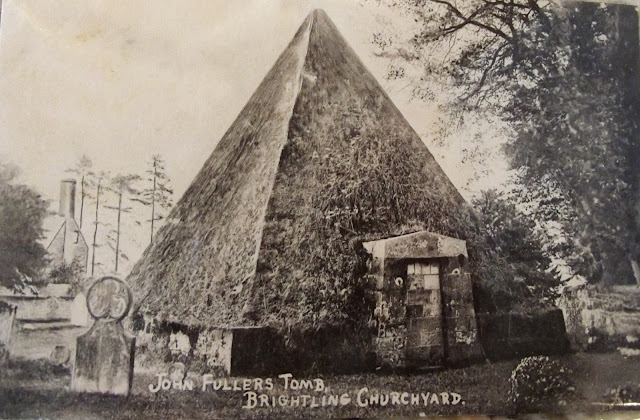 Notice that the entrance is bricked up. Wondering when that was done and when the bricks were removed.

Posted by Annette at 5:39 AM No comments:

Did the Pyramid of Cestius inspire Fuller to build his mausoleum?


The Pyramid of Caius Cestius with the Aurelian Walls, Rome

A page about St Thomas a Beckett Church, Brightling  on the Britain Express website states that Jack Fuller's pyramid mausoleum was modelled after the Tomb of Cestius in Rome. The illustration above, by Parisian artist Victor-Jean Nicolle was done during one of his trips to Rome of either 1787–89 or 1806–11. The Pyramid of Cestius dates to about 12 BC and is approximately 120 feet (36 m) high and made of brick and cement, faced with white marble.
"The pyramid was an essential sight for many who undertook the Grand Tour in the 18th and 19th centuries. It was much admired by architects, becoming the primary model for pyramids built in the West during this period." Source: Wikipedia Posted by Annette at 2:24 PM No comments:

This article, by Andrew John Davies, appeared in The Independent on Tuesday 12 December 1995. Davies likens actor Sir Robert Stephens, who died on 12 November 1995, to "those full-bodied and memorable individuals who live life to its utmost and devil take the consequences" .  Mad Jack Mytton, Lord Rokeby,  John Elwes and Mad Jack Fuller are offered as examples of larger than life characters.

Of Fuller, Davies writes, "His house has an observatory which allowed the servants to peer through a telescope and spot the master returning home from London.". It seems he is confusing The Tower with the Observatory, neither of which are actually in Fuller's house Rose Hill.  He also states the the Obelisk or Brightling Needle was erected to "commemorate the defeat of Napoleon in 1815." Although one may conjecture that this is the case, there is scant evidence to support this claim.

I wonder what Davies is referring to when he closes with, "Guide books are normally available inside the church". Does he mean the Brightling Church Guide by Diana Boyd?

Posted by Annette at 2:14 AM No comments: 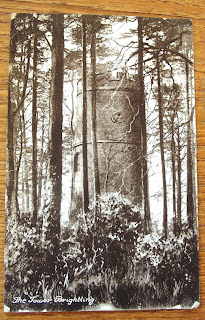 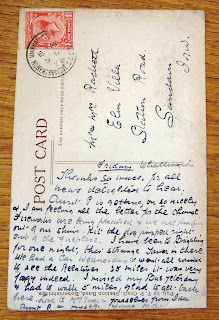 Friday Whatlington
Thanks so much for all news delighted to hear Aunt P is getting on so nicey & I am feeling all the better for the change. Fireworks are being practiced & we are jumping out of our skins. Kit the dog jumped right out of the fireplace. I have been to Brightling for one night, this strange Tower is there. We had a car Wednesday & went all round to see the relatives. 35 miles it was very foggy indeed. I missed my bus yesterday & had to walk 5 miles, glad to get back here. Love to Mrs Vince and yourselves from Ida Aunt P & myself. Yours M. K.
Posted by Annette at 3:00 PM No comments: 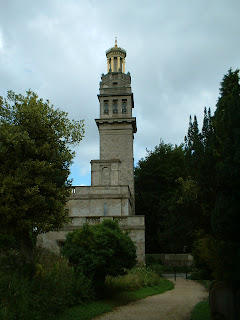 William Beckford has been described as a profligate art collector and writer. His best known work is Vathek a  Gothic novel first published in 1786 in French. He inherited his father's Jamaican sugar plantations, £ 1 million and an income of £100, 000 per year, making him the richest commoner in England. Once on a trip to Portugal he brought a flock of sheep with him so that he could view them from his window and it would remind him of home. He left England, when a scandal broke regarding his relationship with  fifteen year old William Courtney, son of the eighth Earl of Devon, and wandered around the Continent for 13 years. He took his doctor, baker, cook, valet and a small orchestra with him. Beckford also traveled with his own bed and had his hotel rooms wall papered to his own taste.

Beckford's first attempt at building was disastrous. Fonthill Abbey a massive, Gothic revival structure, complete with 300  foot tower,  was designed by James Wyatt. Beckford was impatient to get the project finished and bribed his workers with alcohol which had a devastating effect. The tower collapsed and was rebuilt three times. After Beckford sold the property in 1822 to John Farquhar the tower collapse again, ruining the abbey in the process.

In later life, Beckford moved to Bath and built Lansdown Tower (aka Beckford's Tower), just outside of Bath, Somerset. Architect Henry Edmund Goodridge designed the 154 ft stone ashlar tower which was constructed between 1825 and 1827. It has been a Grade I listed building since 11 August 1972. The tower is now owned by the Bath Preservation Trust and can be rented as a holiday home through the Landmark Trust.  For a detailed description see britishlistedbuildings.co.uk

Posted by Annette at 3:12 PM No comments: Lord Berners, as he was usually known, was a man of many talents and eccentricities. He composed ballets, movie scores, songs and an opera. He wrote several autobiographical works and six novels. His eccentricity became evident at a young age. After hearing that dogs instinctively learn to swim if thrown into water, he threw his mother's spaniel out of the window thinking it might learn to fly. He used to dye his doves pastel colours. Berners had a keen wit and enjoyed playing practical jokes on guests to his home, Faringdon Hall, Oxfordshire, who included: Salvador Dali, Gertrude Stein, H G Wells and Aldous Huxley.

In 1935, Lord Berners built the 140 foot (43m) Faringdon Folly on top of Faringdon Hill. It was designed by Gerald Wellesley, Marquess of Duoro. This square tower is made of Fletton brick and has an octagonal crown. It is a Grade II listed building, since 1986, and is known alternatively as Lord Berner's Folly.

Robert Vernon Heber-Percy, Berner's "companion" inherited the folly and gave it to the people of Faringdon in the 1980s. It is now open to the public on the first and third Sundays from April to October from 11 am to 5 pm, for a small entry fee. The folly surrounded by woods and a sculpture trail that you can visit for free.

Posted by Annette at 5:01 AM No comments: A sketch of Rev John Alington in his leopard skin robe by Samuel Lucas.

Posted by Annette at 3:52 AM No comments: 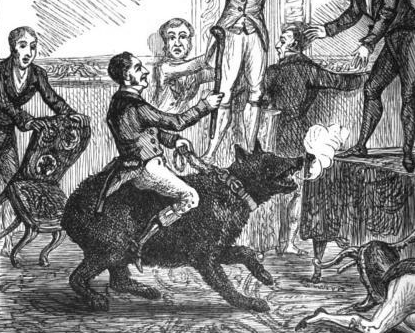 Posted by Annette at 3:50 AM No comments:

The Other "Mad Jacks"

In his book, Curing Hiccups with Small Fires: A Delightful Miscellany of Great British Eccentrics, Karl Shaw writes about two other legendary characters who have been nicknamed "Mad Jack". In chapter two "Sporting Eccentrics" we read about John "Mad Jack" Mytton (1796-1834) and in chapter three, "Religious Eccentrics" we learn about the Rev "Mad Jack" Alington (1795-1863).

John Fuller is not mentioned in Shaw's book. He may have been a larger than life, boisterous character who did things his own way, but he was not truly "Mad" in the real sense of the word. As for Mytton and Alington, I'll let you be the judge.
Posted by Annette at 11:32 AM No comments: 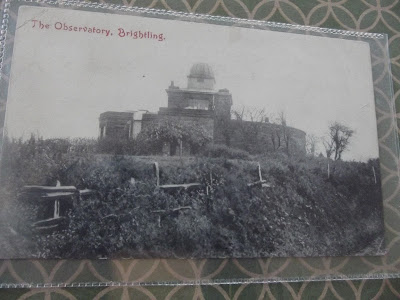 Dear Ciss
Just a few lines to tell you that Granny Buss is ill and Aunt Hartie is home for the Winter. Grandfather wired for her to come yesterday. Please tell Aunt Lou.
From Nell

Any help identifying the sender and recipient would be gratefully received. I believe the house, Khartoum, was at 23 Magdalen Road. 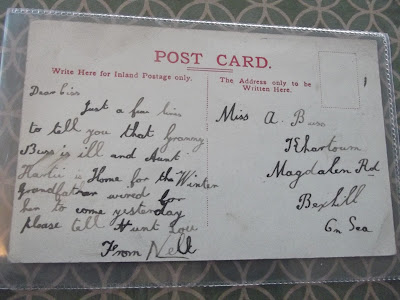 Posted by Annette at 2:56 PM No comments: 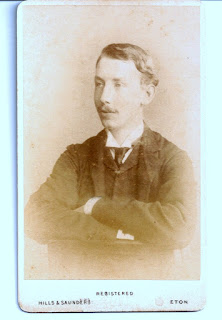 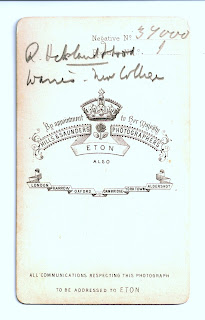 This school photo, taken at Eton,  of the Rev Sir Robert Fuller Acland Hood is unfortunately undated. The 1881 British Census list him as follows: occupation - scholar, boarded at Eton College, Common Lane, Eton, Buckingham. He would have been 15 years old at that time.

His entry in the Alumni Oxonienses: the Members of the University of Oxford, 1715-1886 is: 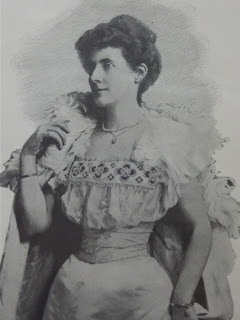 
Society in Town and Country
Week by Week.

Church and Peerage.
--Lady Helena Acland Hood is the eldest of the good looking sisters of the present Duke of Hamilton. She began life as "Miss," for though descended from the 4th duke her father's title was merely admiral. When her brother succeeded to the dukedom she and her sisters in accordance with the custom were granted by Queen Victoria the courtesy title and precedence of duke's daughters. Three years later Lady Helena married a clergyman, Mr. Robert Fuller Acland Hood, a relation of the baronet and M.P. of that name (Sir Alexander Alcand Hood) and of the late Lord Hood of Avalon. Lady Helena is fond of music and flowers and adores the country while not wholly indifferent to the attractions of town. Like most of her family she fully believes in the influence that sport exercises on the physique of the race.

Lady Helena Augusta Charlotte Constance Sidney Douglas - Hamilton was born on 26 Nov 1860 in Shanklin, Isle of Wight. She died on 4 Aug 1950 in Parkstone, Dorset. They one child, a daughter Elspeth Margaret Douglas Acland Hood who was born on 23 Apr 1900 and died on 20 Feb 1901. 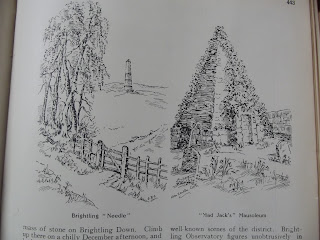 John asserts that without John Fuller and the Needle, Brightling "would have achieved little fame". It would be an unremarkable Sussex village. He writes, " Every summer huge chars-a-bancs labour up from the coast resorts to the altitude of 646 feet, bringing their loads of curious trippers to gaze a the famous Needle, and to speculate vaguely on its origin and purpose." One can visualize these open topped vehicles, very popular in the 1920s, filled with holiday makers from Eastbourne or Hastings visiting Brightling on day outings.

Interestingly, John refers to Fuller's buildings as "masonic enigmas". Pyramids and obelisks have long been considered symbols of freemasonry. This is not the first allusion that John Fuller was a mason that I've encountered. I have yet to find concrete evidence to support this notion, however.

This article is illustrated with charming ink drawings of the observatory, Brightling Needle and "Mad Jack's" Mausoleum (above).  The name of the illustrator is difficult to read but the surname appears to be Boulter-Cooke. A writer and illustrator named Mabel Adeline Boulter-Cooke made contributions to The Sussex County Magazine around the same time. Could this be her work or that of a relative?

Jones writes about the "Views of Sussex (1820)" that Fuller commissioned Turner to create. The drawings were engraved by the Cooke brothers, George and William Bernard . The folio was comprised of "Pevensey Bay from Crowhurst Park (1816)" , "The Vale of Ashburnham (1819)", "Brightling Observatory from Rose Hill Park (1819)", "The Vale of Heathfield (1818)", and "Battle Abbey the Place Where Harold Fell (1819)". My understanding is that the engravings were done from drawings made by Turner betwen 1810 and 1816 and not from paintings.

Crowhurst Park, the former seat of the Pelham and Papillion family, is now a "Holiday Village". Their website says,"The magnificent view which stretches south across the lush green Sussex countryside to the coast, was painted in 1816 by J.M.W. Turner, and although the whereabouts of the original painting is now unknown, a sketch made by Turner of the same scene is stored as part of a collection of sketches by Turner, in the Tate Britain Gallery." Crowhurst Park

Turner's sketchbooks were bequeathed to Tate London. His sketch made of Brightling Observatory can be viewed here.

A second folio, to be called "Views at Hastings and its Vicinity", was in the works but never came to fruition. Below are prints from two of the plates intended for the second folio, top "Bodiham Castle, sic (1817)" and bottom "Hurstmonceux Castle (1820)".

For more detailed information see catalogue entry on the Tate's website here.
Posted by Annette at 6:12 AM No comments: