"Fuller continued to show a keen interest in the state of farming and on January 3, 1822, he attended a meeting of over 300 farmers and landed gentlemen at The George Hotel in Battle, who had gathered to protest over the 'distressed state of agricultural interest', which they believed had been brought about by the Corn Laws of 1815. Fuller put forward several resolutions, bemoaning 'the fallen state of the landed interest' and pleaded for some form of relief. Present at the meetings was William Cobbett, radical journalist, Member of Parliament and author of Rural Rides, who delivered a supportive speech to the gathering, in which he sympathised with their cause but felt there was little could be done to change the situation. The Corn Laws were not abolished until 1846."
Fuller of Sussex: A Georgian squire, by Geoff Hutchinson, pp. 92.

So we establish that Fuller met Cobbett although Hutchinson does not give any sources. He is also getting ahead of himself as Cobbett, despite a number of attempts, was not a member of Parliament until 1832. Rural Rides was not published in full until 1830 although he had started the rides in the early 1820's and they were serialised in his publication The Register.
We know from the Penguin edition of Rural Rides that Cobbett was elsewhere in Sussex at about this time: "The younger [John] Ellman was also a Sussex farmer, but angered Cobbett by calling for tougher corn laws and by expressing his loyalty to the government. There was a near outbreak of fisticuffs between Cobbett and farmers at a meeting of Sussex farmers at which the younger Ellman was prominent."
This meeting took place at Lewes on 9 January 1882, a week after the meeting at Battle. In fact there were two events - a meeting at the County Hall followed by a dinner at the Star Inn. Cobbett had been warned not to go to Lewes where his criticisms of the farmers would not be welcome. Being Cobbett he liked nothing better than to face down his critics. The meeting at County Hall passed off relatively peacefully. Cobbett was urged to attend the dinner - "...being pressed to go, I finally went." He met with hostility and a proposal that he "be put out of the room!" Despite this Cobbett rose to speak pointing out forcefully the plight of the farm labourers and facing down his opponents. He was exultant.
"...but Cobbett rejoiced in his achievements: 'I beat the cocks upon their own dung-hill', he wrote privately. Eight years later, during the Captain Swing revolts, the Sussex landholders came to see that in rejecting Cobbett in 1822 they had rejected the wants and aspirations of an entire class of agricultural workers." See Dyck, Cobbett and Rural Popular Culture, pp. 70-72.

What happened at Brightling during the Swing Riots? Does anybody know?
Posted by Annette at 6:55 PM No comments:

A fun and interesting look at what makes Britain unique and a wonderful tourist destination. The text however, does not live up to the standards of the photographs. The author's motto appears to be, "Never let the truth get in the way of a good story".

"Down on the Downs round Brightling" - Brightling is located on the High Weald which commands a pleasant view of the South Downs.

"Mad Jack was born in 1757 into a wealthy ironfounding family that made its fortune from slavetrading and producing guns for the British Navy " - The Fuller family certainly made money from its sugar plantations in Jamaica which were worked by slaves. But to say they were slave traders is stretching the point.

"Legend says that Jack's corpse was perched on an iron chair inside the tomb..." - This was discovered to be untrue during renovations in 1982. Fuller is indeed buried in the conventional manner beneath the pyramid as directed in his will.

"Never go anywhere on an empty stomach was Jack's motto." - John "Mad Jack" Fuller's motto was 'Utile nihil quod non henestrum' - Nothing is of use which is not honest.

"Before his friends woke up he sent his workers to erect the top of a false steeple out of stones and clay". - It is not possible that the Sugarloaf was erected in just a few hours.
Posted by Annette at 7:56 AM No comments:

Excerpt from What Mad Pursuit by Francis Crick (Basic Books, 1988):

"The current Cavendish Professor was Sir Lawrence Bragg (known to his close friends as Willie), the formulator of Bragg's law for X-ray diffraction..... Bragg was one of those scientists with a boyish enthusiasm for research, which he never lost. He also was a keen gardener. When he moved in 1954 from his large house and garden in West Road, Cambridge, to London, to head the Royal Institution in Albemarle Street, he lived in the official apartment at the top of the building. Missing his garden, he arranged that for one afternoon each week he would hire himself out as a gardener to an unknown lady living in The Boltons, a select inner-London suburb. He respectfully tipped his hat to her and told her his name was Willie. For several months all went well till one day a visitor, glancing out of the window, said to her hostess, 'My dear, what is Sir Lawrence Bragg doing in your garden?' "

(with thanks to Pastor Doug Kramer)
Posted by Annette at 6:14 AM No comments:


Excerpt from " A guide to St Andrew's Church, Buckland Monachorum"

"Behind the chapel altar, and now rather difficult to see, is a huge monument, once despised, but now recognised as an outstanding example of the work of John Bacon, the 18th Century artist whose monuments also appear in Westminster Abbey and St. Paul's Cathedral. The subject of this particular monument is General Elliott, who successfully defended Gibraltar during the long siege by Spain, from 1770 to 1783. As Baron Heathfield he is buried at Heathfield in Sussex. He had married Lady Anne Drake, and their son inherited the Buckland Abbey estates when the last surviving male of the Drakes died childless. The monument to Francis August Elliott, second Baron Heathfield which was designed by John Bacon, Junior is to be seen on the wall adjacent, next to that of Francis Henry Drake, whose estates he inherited.

At a time when this country's fortunes were at a very low ebb, General Elliott's defence of Gibraltar became a symbol of steadiness, courage and endurance. The amazing details depicted on his memorial well repay careful scrutiny. In order to position the memorial, a door and a window of the chapel had to be blocked up and their outline can be seen from outside. The faculty was granted on condition that a new door on the south wall was made. This little door is still there, but is not used nowadays."

Why was the memorial "once despised"? Was it because of the structural changes that were made to the chapel in order for it to be installed? Was it that the subject matter, miltary defense/war, was deemed inappropriate for the house of God?
Posted by Annette at 12:44 PM No comments: 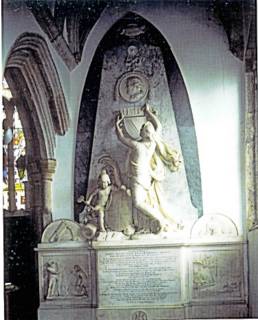 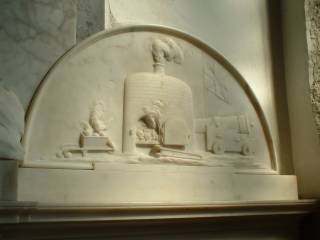 How to Prepare for a Siege by Lord Heathfield

"The system of his life, as well as his education, particularly qualified him for this trust. He was perhaps the most abstemious man of the age. His food was vegetables, his drink water. He neither indulged himself in animal food nor wine. He never slept more than four hours at a time so that he was up later and earlier than most men. He had also inured himself to habits of severity that the things which to others are painful, were to him of daily practice and rendered agreeable to use".

Heathfield had a very distiguished military career. In 1759 he formed the King's Light Dragoons and commanded until 1789. During the peace between 1763 and 1775, general Elliot served for a time as commander of the forces in Ireland. He was nicknamed "Old Cock of the Rock" after his sucessful defence of Gibraltar.

Lord Heathfield died at Aix-la-Chapelle, July 6, 1790, of a second stroke of palsy, while endeavouring to reach Gibraltar, where he was anxious to close his life.
Posted by Annette at 11:44 AM No comments: