Waterloo: The Aftermath by Paul O'Keeffe 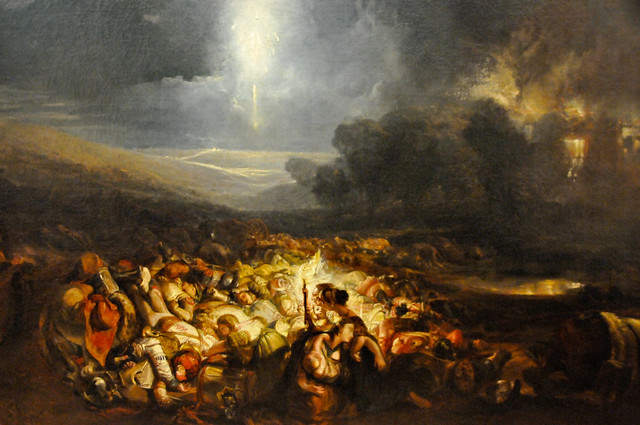 "Just a week after the dispatch arrived, at one o'clock on 28 June [1815], a large gathering of 'MERCHANTS, BANKERS,TRADERS and others' assembled at the City of London Tavern in Bishopsgate Street, 'to consider the propriety of a PUBLIC SUBSCRIPTION for the RELIEF of the SUFFERERS in the late GLORIOUS BATTLES'. The first to donate was a
Mr. John Fuller, who promised 200 guineas and made a speech hoping that other gentlemen would follow his example 'and leave off buying baubles and nonsense, and a pack of fooleries, at the sales and exhibitions of Bond Street'.  The hundred or so individuals and businesses represented at he meeting subscribed immediately the further sum of £9,4898.  On 30 June, the fund had increased to £21,216, an week later to £38, 171, and by 13 July it stood at £74,540. 11s. 8d. The Morning Post of 9 August
published some lines of verse ON THE WATERLOO SUBSCRIPTION REACHING THE SUM OF ONE HUNDRED THOUSAND POUNDS:

Hail, Britain! Thy bounty beyond all dispute,
Must with wonder strike other lands dumb;
When they see that thy heroes, as a victory's fruit,
Receive from they kindness a plumb. *
A plumb for those who fought and bled,
Already they declare;
But some have confidently said,
We'll make that plumb a pair.

Source - Waterloo: The Aftermath by Paul O'Keeffe, published by The Bodley Head, 2014, Page 147.
Painting: The Field of Waterloo by JMW Turner, Tate Britain.
Posted by Annette at 9:15 AM No comments: