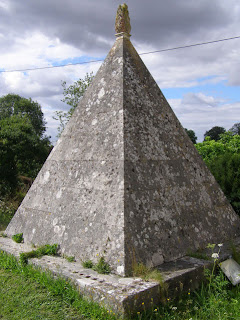 I recently watched an episode of Agatha Christie's Miss Marple called The Murder at the Vicarage, and noticed a pyramid in the churchyard. The Hampshire village of Nether Wallop doubled as St Mary Mead in this series and the churchyard is of St Andrews. The 15 ft high pyramid is the mausoleum of Francis Douce who died in 1760.
A GEOlocation.ws web page says, "[Francis Douce's] cousin built the pyramid at Farley Mount (26204) and another relative ("Mad" Jack Fuller) has a similar pyramidal mausoleum at Brightling (63951). "
The Horse Monument at Farley Mount Country Park was erected by Paulet St John in memory of a horse, named "Beware Chalk Pit", which carried its owner to a racing victory in 1734, a year after having fallen into a chalk pit whilst out fox-hunting".
I am currently trying to establish whether or not either Francis Douce and/or Paulet St John are related to John Fuller. Can anyone help?
Posted by Annette at 5:18 AM No comments: 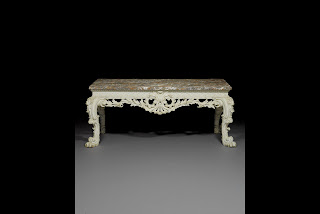 According to family photographs, as well as photographs published in The Sussex County Magazine in 1955, the table was situated in the drawing room at Brightling Park in the 1950s. Soon after these pictures were taken, the house’s Georgian wing, that contained the drawing room, as well as the bedroom and dressing room above, was demolished to pay off death duties. However, this table was relocated in the remaining part of the house, where it has been ever since.
Read full article here.
Posted by Annette at 6:03 PM No comments: