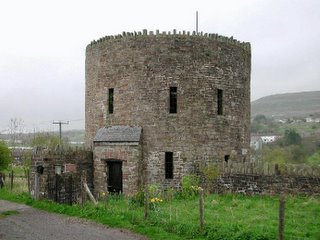 The Round Towers at Roundhouse Farm in Nantyglo, Wales, were built by industrialists Crawshay and Joseph Bailey, who, by the early 19th century controlled much of the iron resources in the region, including the massive iron works at Nantyglo located about a mile south of Brynmawr. Fearing that their workers would one day rise against them, in 1816 the Baileys built the last fortified tower in Britain as a place of refuge against a potential worker's revolt. Today these ruins stand as unique and important reminder of the region's industrial strife. 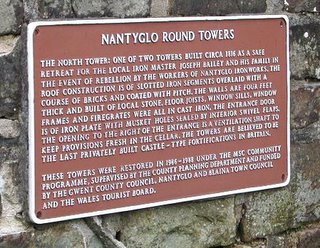 Posted by Annette at 7:09 AM No comments:

Lord Egremont, the [Wey & Arun Canal] Trust President, officially unveiled a plaque at the Three Compasses Inn at Alsfold on Wednesday 12th August to commemorate the opening of the canal in 1816. Lord Egremont is the greatgreatgreat grandson of the 3rd Earl of Egremont, who promoted the canal and was the first Chairman of the Wey & Arun Junction Canal Company. The canal’s opening ceremony took place at the Inn on 29th September 1816 amidst great rejoicing when a roasted ox and 200 gallons of ale were consumed. The current landlord couldn’t quite match this but did provide various delicious snacks and drinks for the invited guests.
Lord Egremont also presented an original drawing of the Summit Level, by local artist John Russell Hayes, to Mr Jim McAllister of Dunsfold Park in recognition of his help and support. The Trust hopes to reopen the summit level past the Three Compasses Inn soon and has appointed a Summit Level manager for this purpose. View source here. Read more here.
Posted by Annette at 6:58 AM No comments: