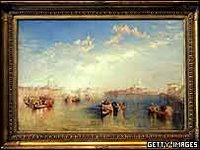 A Turner masterpiece has set a new record for a British painting when it was sold for $35,856,000 (around £20.5 million) at Christie's in New York. (Pic: www.christies.com)
The painting of Venice - entitled Giudecca, La Donna della Salute and San Giorgio - has beaten the previous record of £12 million for Constable's The Lock, sold in 1990.
The Venice painting, last seen at public auction more than 100 years ago, has also beaten the world record for a Turner which had stood at £5.5 million for Seascape, Folkestone, bought in 1984. It has been sold by the not-for-profit missionary organisation, the St Francis of Assisi Foundation in New York State, and has been described as the finest Old Master to be sold at Christie's in New York since 1989.