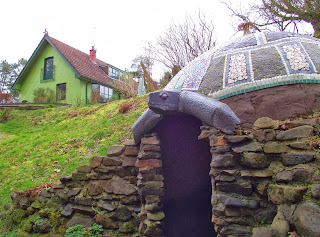 Blogger YMGW recently visited the home of The Folly Fellowship's Alan and Clair Terrill in the Hope Valley, near Minsterley, Shropshire. Unsurprisingly, the garden is home to follies and whimsical metal animal sculptures.

Posted by Annette at 3:45 AM No comments:

Ruin Lust, an exhibition at Tate Britain from 4 March 2014, offers a guide to the mournful, thrilling, comic and perverse uses of ruins in art from the seventeenth century to the present day. The exhibition is the widest-ranging on the subject to date and includes over 100 works by artists such as J.M.W. Turner, John Constable, John Martin, Eduardo Paolozzi, Rachel Whiteread and Tacita Dean.

Joseph Mallord William Turner
The Chancel and Crossing of Tintern Abbey, Looking towards the East Window1794Pencil and watercolour on paper
Posted by Annette at 3:32 AM No comments:

Watercolour of Rosehill by S.H. Grimm 1784

A north-east watercolour view of 'Mr Fullers house at Rosehill' (Rose Hill, in Brightling) in (East) Sussex, drawn in 1784 by S.H. Grimm. Source: British Library. Samuel Hieronymus Grimm was born in Burgdorf, Switzerland on 18 January 1733. He worked in oils until 1764 and chiefly in watercolour and pen and ink after that. Under the patronage of the Rev Sir Richard Kaye, Grimm travelled widely in England recording the landscape between 1768 and his death in 1794. The British Library has some 886 of his drawings of Sussex and 2662 works altogether.
Posted by Annette at 9:38 AM No comments: