The Geograph British Isles project aims to collect a geographically representative photograph for every square kilometre of the British Isles and you can be part of it. 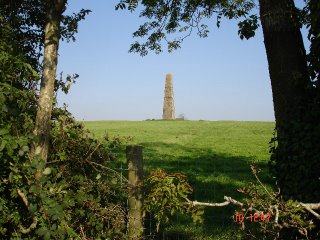 The Brightling Needle stands to the north-west of Brightling Park. It is 65ft high and stands on the second highest point of Sussex, 646ft above sea level.The most obvious reason John (mad jack) Fuller had this built to celebrate Wellingtons victory over Napoleon in 1815. It is also a possibility that Fuller had it built just to provide work for the villagers during severe unemployment.This is one of Jack Fullers five follies.

Photo by Janet Richardson, with kind permission.
Posted by Annette at 5:56 PM No comments: