SOME SUSSEX "FOLLIES" by William A. Bagley 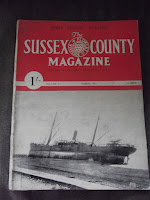 "As usual, Sussex can claim its share of interesting things, and when it comes to "Follies," our county possesses some that are unique. The most compact group of these curiosities are those in the neighbourhood of Brightling and Dallington, the work of Squire "Jack" Fuller who made a hobby of erecting these "megalithic" monuments on his native heaths and hills.  He was a real "character" with a will of his own.  He succeeded to a great fortune at an early age, and there is no little doubt that lack of parental control lead to his subsequent eccentricities.  He represented the County in Parliament from 1801-1812, was reprimanded for insulting the Speaker, and refused a peerage, rather than desert his party.  He had two hobbies, music and science, and was a patron of literature.  It was he who saved Bodiam Castle from demolition and he who encouraged Turner, the artist. He liked to be known as "Honest Jack," but apparently did not rely on the honesty of others.  His progress from London to Brightling was almost regal.  The coachmen and footmen were armed with pistols and swords, and the coach provisioned as if for an expedition into the wilds.

Altogether a most interesting man, and one whose story was related in a early number of the S.C.M. [Sussex County Magazine], but how many would take the trouble to look up his record were it not for the constant reminder afforded by some of the strange monuments he erected?

On Brightling Down, 646 ft. high, stands an obelisk known as the "Needle," built on the site of an old beacon which blazed its warning of the coming of the Armada, and later, prepared to warn Sussex of the coming of Napoleon.  From this Needle--a great landmark--a superb panorama interrupted only by woods on the S.E. is obtained.  At Dallington, nearby, is a conical, two storied building known as the "Sugar Loaf."  The Observatory, built from the designs of Sir Robert Smirke, stands on Brightling Down.  This same architect designed the ugly pyramid, Fuller's mausoleum, in Brightling churchyard.

Curious tales are told of "Jack" Fuller.  It is said that he sought for a hermit to occupy the mausoleum for one year, during which he was not to shave, wash cut his hair, or hold any intercourse with the outer world.  After this ordeal, he was to be made a gentleman for life.  There were no offers!

It is also said when he was laid to rest in his strange tomb--in 1834, aged 77--he was placed, by desire, in an iron chair, with broken glass strewn all around.  He feared that the Devil would come to claim his own, and in doing so, would cut his hooves on the glass!

Both of the two foregoing stories are, in all probability, just idle legends engendered by the eccentric habits of the Squire.  In many respects, his foibles were exaggerated.  Take for example the massive miles-long wall surrounding his estate (Rose Hill: named after his wife)*. Not many tourists, who come in motor-coaches in the summer, notice this.  Those who do may think it another of his "follies".  One is not so sure.  Like other Grand Old English Gentlemen, Jack had more than his share of poor men at the gate, some of whom professed to be out-of-work masons and labourers.  Rather than give them his charity, he created this artificial job.  The more the beggars came, so did the wall grow, until it reached the proportions seen to-day."

Other Sussex follies mentioned in this article:

Posted by Annette at 6:26 AM No comments: