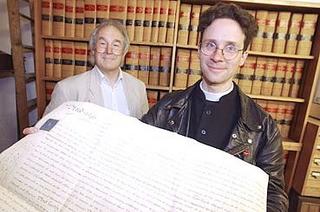 A 200-YEAR-OLD document which established a generous fund for the blind has been handed into the East Sussex Record Office.

The charity was founded in 1795 by John Fuller of Catsfield [Christened 20 Apr 1726,All Saints, Lewes; died unmarried 1810] cousin of the infamous 'Mad Jack' Fuller of Brightling [John Fuller of Catsfield was actually the brother of Mad Jack Fuller's mother Frances Fuller and thus his uncle not cousin]
The Catsfield Fuller was a wealthy landowner who nearly lost his sight due to disease. On his recovery, Fuller decided to help blind people around the county.
The deed guaranteed a princely sum of £60 a year raised from rent on a Great Lulhams farm, a 105-acre site in the parish of Ripe.
Amazingly, it's still valid.Christopher Whittick, senior archivist at the record office, explained. "In the olden times, if you wanted to secure a regular payment, one way to do it would be a deed of governance which gave part of the rent on the land to the party you had in mind.
"In this case the deed locked the liability of the £60 to the land, so if it was sold on the money still had to be paid by the new owner.
"Sometimes people paid a lump sum to clear it but as I understand it, this deed is still fixed to the land."
The deed was given to the rector and churchwardens at St Lawrence's Church, Catsfield, in order for them to collect and distribute the money.
Initially those deemed suitable received 16 shillings a month for the rest of their lives.
The annual income is still being collected by the church, but in latter days the distribution has been handled by Hastings Voluntary Association for the Blind.
Current St Lawrence vicar, Rev Jonathan Beswick, said: "I think the discovery of this document is a very timely reminder of the church's responsibility to the wider community.
"When it was founded this was of enormous value. £60 was an awful lot of money then but unfortunately it has never risen and the deed is less significant now."
The original deed was found to be missing in 1928, but the charity remained protected as someone realised that it had been recorded in the Chancery. It was recently discovered by a local historian.
Mr Whittick added: "The document is in perfect condition which is amazing considering it will be 200 years old in 2005.
"As well as being a very welcome addition to the holdings of the Record Office, the re-appearance of it reminds us of some important historical truths, like the immense generosity of wealthy landowners in the days before the nationalisation of poor relief and the financially terminal consequences of the failure of charities to re-invest - 208 years after its foundation, the charity's income can hardly be worth collecting.
The document is available at the Record Office in the Maltings, Lewes, and the document's reference is ACC 8775/1.

Inherited Park Gate in 1760. The house was named Catsfield House in his time. He suffered but recovered from blindness, this led him to set up a charity administerd by the rector and churchwardens of Catsfield church in 1795. The income from a rent charge on property in Ripe near Lewes was to be "for the use and benefit of six poor blind persons of the county of Sussex' [CVA Fuller charity deed]. After his death on 31 March 1810, a memorial by Nollekens was placed in the church at Catsfield by his nephew, John (Mad Jack) Fuller of Brightling. [Huchinson;97] John Fuller's will written in 1794 stated that £10, 000 was left to Rev Thomas Fuller of Heathfield [1755-1832; 1st cousin once removed of John Fuller of Catsfield]and all manors, messuages, lands and real estate to two trustees on behalf of his nephew John Fuller of Brightling and his heirs [ESRO SAS RF 11/28]. John had no heirs but did not die until 1834, the Rev Thomas Fuller is recorded as owning the Catsfield property in 1810 and purchased the manor of Broomham Park Gate from the Earl of Ashburnham in 1813 [Salzman;245] Presumably John and Thomas had come to an arrangement between themselves for the transfer of his estate.
Posted by Annette at 5:33 AM No comments: