Up to a Point by David Winpenny

In search of pyramids in Britain and Ireland

I highly recommend this comprehensive reference book, a mammoth undertaking, which includes historic pyramids as well as those built in recent years. Chock full of pictures and well researched text, I'm sure I'll return to it again and again.


On the two page spread about Mad Jack Fuller's mausoleum (68 & 69), Winpenny begins by wondering why Fuller's pyramid is so well known today, when so many others have faded into obscurity. He proposes that it may be because at 25 feet tall, it's hard to miss. He adds that it may be because Fuller had a number of follies built in and around his Rose Hill, Brightling estate, of which his pyramid mausoleum is only one. There are also the myths surrounding Fuller's pyramid: he's interred seated on a iron chair in a top hat in front of a table with a full dinner and bottle of wine, around him on the floor a circle of broken glass to keep the devil from claiming one of his own. When renovations were made in 1982 this was proved wrong but a stanza from Gray's Elegy in a Country Churchyard inscribed on an interior wall was revealed.

Perhaps the pyramid's notoriety is just part of the larger legacy left behind by a larger than life Georgian Squire - his parliamentary career; the Fullerian Professorships at the Royal Institution; Eastbourne Lifeboat; Belle Tout Lighthouse; JMW Turner's Views of Sussex and other works; Bodiam Castle; the bells and barrel organ at St Thomas à Beckett Church, Brightling; the Fuller family's Sussex landholdings, ironfounding at Heathfeild and sugar plantations in Jamaica.

Fuller's pyramid was completed on 15 June 1811 and Winpenny writes, "For the remaining 23 years of Fuller's life he could see it from the windows of Rose Hill", Winpenny, pg. 69. An interesting notion. I can't help but wonder if this is still the case. From the aerial view, seen below, it is plausible but it would depend on the height of the trees separating the churchyard and what is now known as Brightling Park. 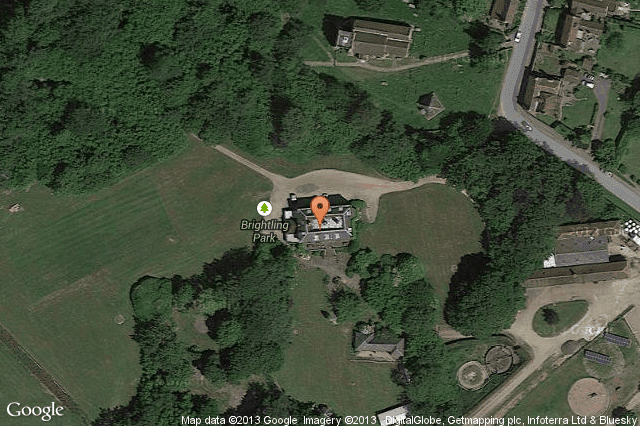 Merry Christmas and Best Wishes for 2014 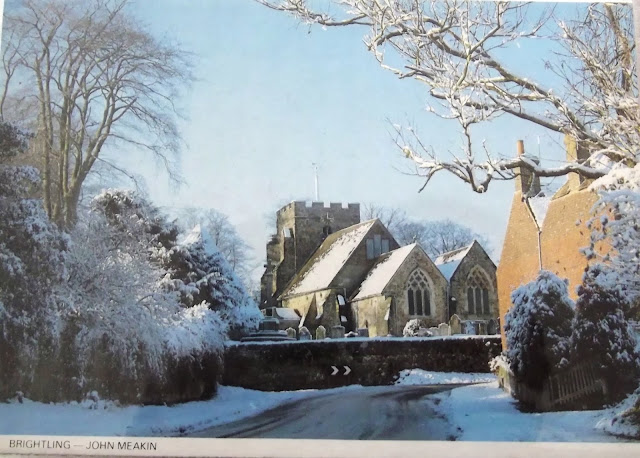 You can just make out the diagonal lines of John Fuller's snow covered pyramid mausoleum to the left of the church, tucked in behind the trees.
Posted by Annette at 11:52 AM No comments: 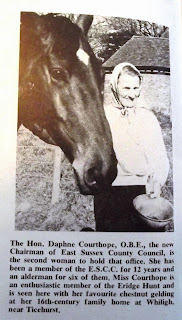 Photo caption: "The Hon. Daphne Courthope, O.B.E., the new Chairman of East Sussex County Council, is the second woman to hold that office. She has been a member of the E.S.C.C. for 12 years and an alderman for six of them. Miss Courthope is an enthusiastic member of the Eridge Hunt and is seen here with her favourite chestnut gelding at her 16th-century family home at Whiligh, near Ticehurst."

The Hon. Elinor Daphne Courthope OBE, DL, MFH and John "Mad Jack" Fuller are 4th cousins 5 times removed. Their common ancestors are Henry Courthope and Anne Burrell. She was born in 1902, never married, died in June of 1980 and is buried at St Mary the Virgin, Ticehurst, Sussex.
Posted by Annette at 3:20 PM No comments:

Browsing Around Brightling written and illustrated by E. M. and Kenneth Sivers 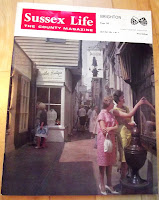 The authors relate their drive and picnic lunch at Brightling, waxing poetic about the "lovely Sussex panorama" and the views painted by JMW Turner. They refer to one of Fuller's follies as, "a little Grecian Temple of Love", which is a name I'd not heard before in reference to Brightling Park's Rotunda Temple.

The caption under a photo of the obelisk reads, "Brightling Needle, one of "Mad Jack" Fuller's famous follies. It stands some 940 feet above sea level in a lovely East Sussex countryside".  The article goes on the say that Sussex feared invasion by Napoleon and, "Indeed so imminent was the danger in 1805 that, on the hill behind us, some 640 ft above the level of the sea, a beacon was made ready to give alarm should enemy ships be sighted". Brightling Down or Brightling Beacon is approximately 646 ft above sea level and the oblelisk or Brightling Needle is about 65 ft tall. So the height of  940 feet mentioned in the photo caption is clearly an error. 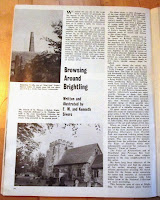 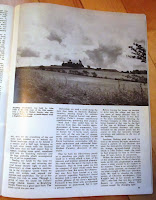 Posted by Annette at 3:07 PM No comments: