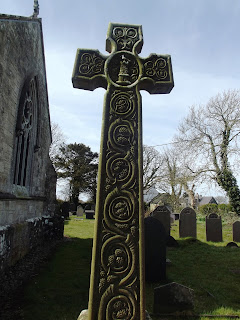 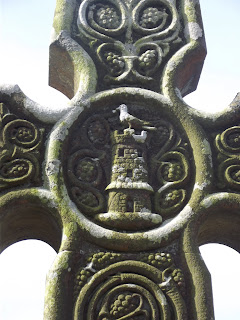 This large cross in the churchyard of St Cadwaladr's Church, Langadwaladr, Wales bear the following inscription:

Posted by Annette at 5:07 PM No comments: 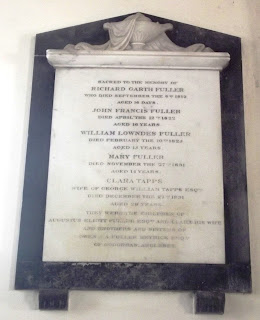 Posted by Annette at 1:10 PM No comments:

Catherine Sarah Fuller was born in St James, Westminster and died unmarried in Clifford Street, London. She was the third of five daughters of Augustus Elliot Fuller, one of John Fuller's heirs. She was buried in the churchyard of St Cadwaladr church in Llangadwaladr, Anglesey, Wales on the 12th of June 1858. A memorial in the church reads: 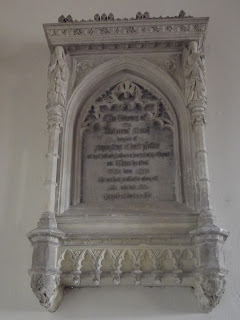 In Memory of
Catherine Sarah
daughter of
Augustus Elliot Fuller
of Rose Hill and Ashdown House Sussex
and Clara his wife
born
the ninth of November mdcccxiv [1814]
and died
the sixth of June  mdccclviii [1858]
Posted by Annette at 2:55 PM No comments:

We are now on holiday in Wales and have visited St. Cadwaladr Church in Llangwaladr, which is on the Bodorgan Estate. Jack Fuller's will provided for two main beneficiaries: his nephew (by his sister Elizabeth) Peregrine Palmer Fuller Palmer Acland and Augustus Elliot Fuller, the son of his first cousin John Trayton Fuller of Forest Row, Sussex. Augustus Elliot Fuller married Clara Meyrick of Bodorgan, Anglesey, Wales. This memorial, in the church, is to Clara Meyrick's father Owen Putland Meyrick: 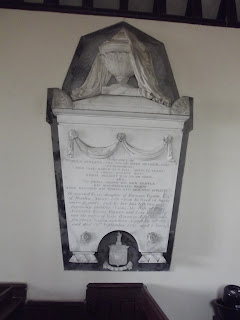 IN MEMORY OF
OWEN PUTLAND, THE SON OF OWEN MEYRICK, ESQR
OF BODORGAN;
WHO DIED MARCH 24TH 1825, AGED 72 YEARS,
A TRULY HONEST MAN:
WHOSE DELIGHT WAS TO DO GOOD,
AND
"TO DWELL AMONG HIS OWN PEOPLE."
HIS DISCONSOLATE WIDOW
HERE RECORDS HIS WORTH AND HER OWN AFFLICTION:

He married Clara, daughter of Richard Garth,
Esqr of Morden, Surry (sic), with whom he lived in happy
union 50 years, and by her has left two only
surviving children, CLARA, the Wife of
AUGUSTUS ELLIOT FULLER, and LUCY ELIZABETH
now the widow of ISAAC HARTMAN, Esqr. His only
son, OWEN GARTH, was born August the 16th 1776
and died September 1783, aged 7 Years.
Posted by Annette at 8:56 AM No comments: 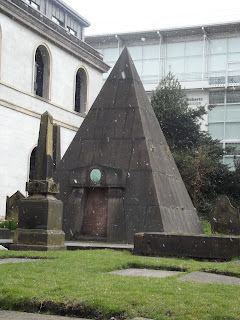 In the churchyard of this Presbyterian church, closed since 1975, stands a pyramid mausoleum dedicated to William Mackenzie. He was born on the 20th of March in 1794 at Nelson, Lancashire and died on 29 October 1851 at his home at 74 Grove Street, Liverpool. Mackenzie was a civil engineer and contractor who worked on canals, tunnels and railways throughout the United Kingdom and parts of Europe.

Legend has it that Mackenzie was a gambler who had a wager with the devil and so asked to be interred seated upright holding a winning hand of cards so Satan couldn't claim his soul after his death.

This seems highly unlikely as the pyramid was commissioned by his younger brother, and sole heir, Edward, in 1868 which was seventeen years after his death. An inscription reads: "In the vault beneath lie the remains of William Mackenzie of Newbie, Dumfriesshire, Esquire who died 29th October 1851 aged 57 years. Also, Mary his wife, who died 19th December 1838 aged 48 years and Sarah, his second wife who died 9th December 1867 aged 60 years. This monument was erected by his Brother Edward as a token of love and affection A.D. 1868. The memory of the just is blessed". Source: http://en.wikipedia.org/wiki/William_Mackenzie_(contractor) 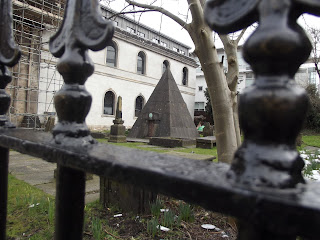 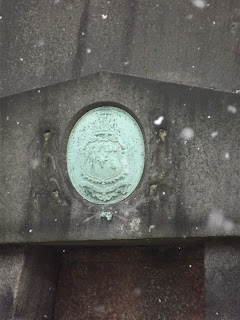 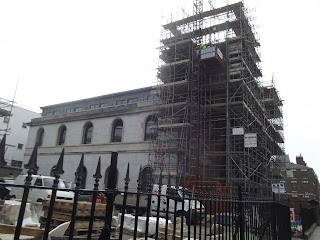 The day we visited was cold, overcast and light snow was falling. The church is under extensive renovations but I believe it has been decommissioned so more research is needed to find out about its future.
Posted by Annette at 10:31 AM No comments: