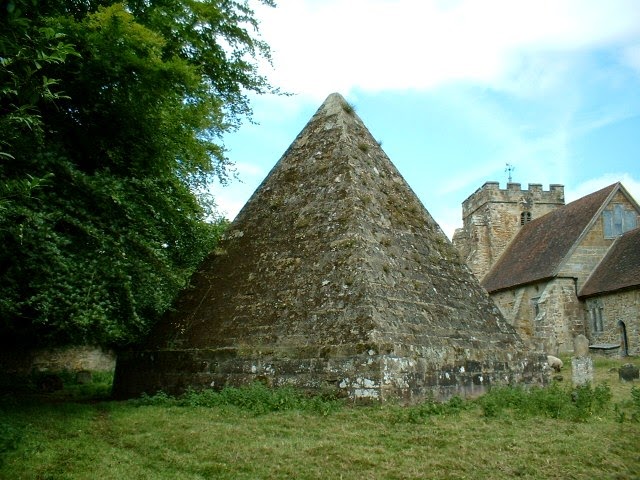 On Saturday last, the remains of this lamented gentleman were conveyed to the tomb, at Brightling, in this county.  Precisely at two o'clock the procession arrived at the church, and presented one of the most imposing spectacles ever witnessed in that part of the country. The melancholy procession was preceded by a number of girls, dressed in dark coloured frocks, with broad white collars, these were followed by boys, habited in white round frocks, black crape hatbands and gloves -- next came about 66 men (workmen, we believe, on the estate of the deceased) clothed in new white round frocks, crape hatbands and black gloves -- after these were about 100 mounted horsemen, in black cloaks and silk hatbands -- plume of feathers, mutes &c.  The hearse, drawn by six horses, hung with silk escutcheons of the family arms -- the carriage of the deceased with the blinds closed drawn by six horses -- three or four mourning coaches -- followed by a number of gentlemen's carriages.  As soon as the procession arrived at the church gate, those who preceded the hearse formed an avenue to the church, through which the body was borne by eight men; the coffin was covered with a most superb pall, decorated with silk escutcheons.  Immediately the body entered the church yard, the fine organ (gift of the deceased), commenced a solemn dirge, and the usual service was performed; the body was then removed to the place destined for its reception, a large high pyramid, similar, but in miniature, to those of Egypt.  The day being fine, a vast number of sorrowing well dressed persons, of both sexes, amounting to 5,000 were present on the melancholy occasion.

The Hermit in the Garden: From Imperial Rome to Ornamental Gnome


"In 1777 John Fuller, who is popularly but inaccurately known as Mad Jack Fuller (he seems to have been wholly sane), inherited from his uncle the family estate of Rose Hill, in Brightling (Sussex).  After a tumultuous political career, in the course of which he defended he living conditions of plantation slaves (he owned a plantation in Jamaica) and was ejected from the House of Commons for drunkenness, Fuller left parliament at the dissolution of 1812 and settled at Rose Hill, where he had already embarked on the construction of a memorable set of follies. He began with a Coadestone (i.e. ceramic) summer house with a ‘Tudor’ arch (restored in 1992) and went on to commission his own mausoleum (an 8-metre high pyramid in Brightling churchyard), a rotunda garden temple, an obelisk known as the Needle, a hermit’s tower and a building known as the Sugar Loaf (an 11-metre cone which alludes to his sugar plantation).
The 8-metre hermit’s tower was built with a view to accommodating an ornamental hermit, and Fuller is said to have advertised for a hermit with the usual conditions of service.  Here, for example is the account in Follies: A National Trust Guide:

"The requirements were a little excessive: no shaving, no washing, no
cutting of hair and nails, no conversation with any outsider for a period
of seven years, after which the happy hermit would be made a Gentleman.
No takers.”

I have not been able to trace the advertisement.  The reason for this failure, I think, is that there was no advertisement.  Fuller’s follies are enigmatic, and myths have emerged from the fog of uncertainty.  Fuller is said, for example, to be interred in his pyramid sitting at a table dressed for dinner, with a bottle of claret awaiting consumption.  In the same way, the tower, which may have been a viewing platform for Bodiam Castle (which Fuller owned and restored), is now known as the hermit’s tower.  It has been expertly restored by the British Gypsum Company, and tourists can climb to the top to enjoy the view, but Fuller’s intention to accommodate a hermit in the building is a harmless fantasy devised long after his death."


[No page numbers give in ebook version]
Posted by Annette at 8:16 AM No comments:

This lavishly illustrated book is a super reference guide to Georgian landscape garden buildings. It is organized into chapters on various structural forms from arches to grottoes to temples and towers.

John Fuller’s Brightling follies and other buildings are not mentioned but it is easy to map out into which chapters they would appear.

The suggestion that Fuller advertised for a hermit to live in the tower seems to have been made long after the fact, so I would not include the tower in the “Hermitages and Root Houses” chapter.

The Sugar Loaf, on the other hand, is not so easy to categorize. Legend has it that Fuller had this cone-shaped folly built to win a wager that he could see the spire of St. Giles, Dallington from his home, Rose Hill.
Posted by Annette at 7:50 AM No comments:

FUNERAL OF THE LATE MR. SHIELD.

Yesterday morning, at eleven o’clock, the remains of this most distinguished musician and amiable man were removed from his late residence, in Berners-street, for interment in Westminster Abbey.  The procession moved in the following order: - Two mutes in silk dresses.  A state plume of ostrich feathers, with a page on each side.  The hearse drawn by four horses decorated with ostrich feathers and velvet coverings.  Two mourning coaches, drawn by four horses, each similarly caparisoned, containing the following private friends of the deceased, viz.: Colonel Croasdale, Dr. Cusak, Thomas Broadwood, Esq.[i], Valentine Blake, Esq.[ii], John Bernard Cramer, Esq.[iii], Vincent Novello, Esq.[iv], John Taylor, Esq. (late editor of the Sun)[v], the Alexander Parkinson, Esq. Then followed in the private carriages of John Fuller[vi], Esq., of Devonshire –place, and Thomas Broadwood, Esq.  The funeral arrived at the southern entrance of the Abby by Dean’s-yard precisely at twelve o’clock, and was met at the entrance of the cloisters by the choristers of his Majesty’s Chapel Royal in their state dresses, and also by the choristers belonging to Westminster Abbey and St. Paul’s Cathedral, accompanied by the following eminent musical professors: -- Messrs. Braham[vii], Hawes[viii], Welch[ix], Goulden[x], J.O. Atkins[xi], Hobbes, Fitzwilliam, Leete [xii], Terrail[xiii], and Evans[xiv].

The coffin was then borne into the church by the western entrance, and placed on trestles immediately under the organ left, surmounted by the plume of feathers.  The funeral service was then read most impressively by Doctor Dakin[xv], the Precentor of Westminster Cathedral: after which Doctor Greene’s[xvi] beautiful anthem, of “Lord, let me know mine error,” was delightfully sung by Masters Morgan and Monro, of Westminster choir.  The fine toned swell of the organ had a sublime and soul-thrilling effect.  Every stall and seat in the great aisle of the church, as well as the organ loft, was crowded with a most respectable assemblage of persons, particularly ladies.  The body was then removed (in the same order it entered) to the grave, situated in the cloisters on the south side of the Abbey, and deposited next the remains of Mr. Saloman[xvii], a long-esteemed friend of the deceased.  Croft[xviii] and Purcell’s[xix] beautiful Burial Service was then chaunted with unusual effect, by Messrs. Braham, Hawes, Goulden, J.O. Atkins, Leete, Hobbes, Clarke, and Evans. The solemn reverberation of the harmony throughout the adjoining cloisters can be more easily imagined than described. The coffin was then lowered into the earth; it bore the following inscription:--“William Shield, Esq., died January 25th, 1829, aged 80.”  Several theatrical and musical persons of eminence joined the mournful cavalcade on its way to the Abbey.  The entire funeral (which was a private one) was conducted by Messrs. Reid of Goodge-street, Tottenham-court-road.